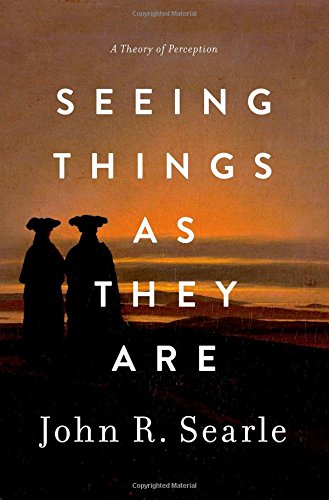 Here’s Los Angeles Review of Books on his new book, Seeing Things As They Are

There is an external world, and it is full of things: tables, crocodiles, textures, etc. These things and this world exist whether I like it or not: their existence is independent of my beliefs, opinions, or preferences, and hence we say that such an existence — or, to use the technical term, such an ontology — is objective. There is also a subjective world, and it consists of internal states of mind. Such states are not ontologically objective, but subjective: they depend for their existence on the person who has them. Moreover, there is generally something that it feels like to be in or occupy a state of mind: we all know what it is like to be mad or tired, and we similarly know (although this case is more complicated) that believing something feels different from not believing it. The central claim of direct realism is that perception puts the external world into contact with the subjective one. Thanks to the rise of modern vision science, we have a basic sense of how this story might go: an internal causal process is initiated by arrays of light moving from entities in the external work to sensory receptors in our retinas; these arrays of light are then processed by a module in ours head that constructs an output perceptual representation on the basis of proprietary perceptual principles. This perceptual representation has content: it encodes conditions of satisfaction that are either accurate or inaccurate, depending on the extent to which the representation corresponds with the scene that initiated the causal process. While beliefs, desires, and other mental states are also associated with representational contents — beliefs can be evaluated as true or false, desires can be fulfilled or unfilled, and so forth — perceptual representations are special in that they cannot be detached from, or entertained independently of, the scenes that prompt them. In the more contemporary philosophical jargon, perception provides a non-conceptual means by which minded creatures get in touch with an objective world.

There seems to be a lot to recommend this basic picture of perception. How could we plausibly deny that perception plays a central role in connecting us to, and helping us acquire knowledge about, the empirical world? According to Searle, however, the picture has not only been denied; it has been denied by “just about every famous philosopher who writes on this subject.” More.

Much to fuel a Sat nite chat into the wee hours, if one is among friends inclined to philosophy of perception, mind, or science.

Note: The book seems to be retaining interest.

5 Replies to “John Searle on seeing things as they are”