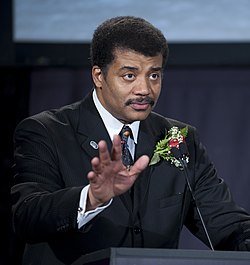 Remember, from last Saturday, “A lot of science writers are tweeting about duck sex now, so that’s a plus.”

On balance, Neil deGrasse Tyson has done an immense amount of work raising the public’s awareness around science. But peel back the veneer of his good fight against anti-science and you’re left with something that isn’t exactly pro-science. Starting a feud with B.o.B. over why the Earth isn’t flat doesn’t promote science, nor does it “convert” non-believers. Endlessly tweeting about scientifically incorrect things in ‘Star Wars’ isn’t getting anyone to thumb through a research paper. More.

Gosh, Digg’s Cool score is pretty high. So is Tyson going to join Dawkins on the C list of retro science stars? Right now, the big news about Dawkins is, he’s not popular with the government of Turkey…

Who’s the next science superstar?

See also: Tyson wrong on duck sex? That would only be an argument against intelligent design if the system didn’t work well, but it does.

One Reply to “Tyson a bore, taking the fun out of science?”