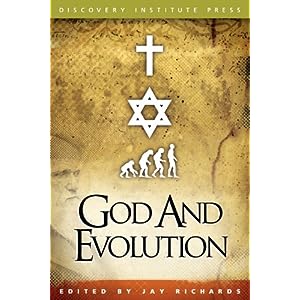 But better still, likes it for the right reasons:

God and Evolution, edited by Jay W. Richards, is an essay anthology designed to explain and clarify the essential definitions, scientific claims, theological issues and philosophical problems that pervade the debate about the compatibility of neo-Darwinism and religious faith. The central question of the text, specifically, is whether or not theistic evolution is a tenable position for theists of Christian or Jewish persuasion. Each essay expands upon a different aspect of the subject, but together they have a common goal: to shed light on what Richards refers to as the God and evolution enigma. He argues that this is a gray area that sorely needs illuminating; he says, “In a sense, it touches all of the biggest questions we can ask about ourselves and the world we live in.”[1]

Not a screed but an opportunity to examine the underlying issues.

In “Smelling Blood in the Water,” Casey Luskin explains why the acceptance of Darwinian evolution by the religious community will never satisfy atheist promoters of the science. Luskin says, “[R]eligious advocates are…allying themselves with people who favor the downfall of religion.”[3] Some “new atheists” even openly argue that there is no way to reconcile evolution with religion. Efforts to claim compatibility between Darwinism and theism are usually politically motivated and have an unspoken aim of diminishing religion, Luskin argues.

That is a question of fact. And what’s fascinating  is that the evidence points so clearly in one direction, and it is not something the Christian Darwinist can evaluate, without questioning why he really has such a big commitment to Darwin, in the age of epigenetics and horizontal gene transfer. Maybe readers can evaluate why he does.