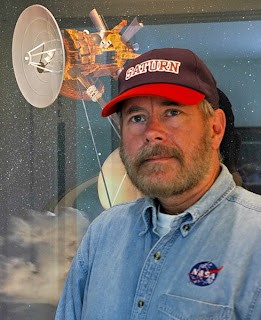 David Coppedge is an information technology specialist and system administrator on JPL’s international Cassini mission to Saturn, the most ambitious interplanetary exploration ever launched. A division of California Institute of Technology, JPL operates under a contract with the federal space agency. Coppedge held the title of “Team Lead” System Administrator on the mission until his supervisors demoted and humiliated him for advancing ideas that superiors labeled “unwelcome” and “disruptive.”

He favoured intelligent design and talked about it, and one superior didn’t like that.

There was no workplace policy that forbid discussing private opinions at work, and claims that Coppedge harassed fellow employees proved unsubstantiated.

What did Coppedge do to get himself in trouble? He occasionally chatted with interested colleagues about the scientific case for intelligent design, he passed around a couple of pro-ID DVDs, which made good sense since JPL’s officially defined mission includes the exploration of questions relating to the origin and development of life on earth and elsewhere. His supervisor severely chastised him for this, humiliated and demoted him.

Now he’s been fired. JPL claims it was a cost-cutting measure. … The truth will emerge when Coppedge’s lawsuit comes to trial, but the appearance here certainly suggests a final strike at Mr. Coppedge for his offense of introducing fresh ideas to co-workers.

In the light of this case and the recent, similar Martin Gaskell case, one hardly knows what to make of doubt that Ben Stein was right. There is an Expelled factor. Today, you can doubt anything except Darwin, and you must contrive not to know about or speak of the growing mass of evidence that contradicts the stuff government forces students to learn in tax-funded schools.

But there is no freedom for adults either, it turns out. Darwinism today has nothing to do with the science and everything to do with protecting the cultural status of an icon that has given government everything from compulsory sterilization to scientific racism to … the right of tax-funded institutions like JPL to run inquisitions powered by devotion to that icon.

It’s bad enough when private universities clamp down on the free exchange of ideas. But public institutions have often seemed to be the worst offenders of all in this respect, and that is something taxpayers have every right to protest.

Klinghoffer suggests that Americans phone: 202-358-1010 or e-mail Charles Bolden, charles.bolden@nasa.gov Yet will they?

I’ve covered ID stories for about a decade now, and on the way, I learned something interesting: What is keeping Darwinism alive right now is not evidence; the evidence is leaning sharply against Darwin’s “information for free” mechanism.

What keeps Darwinism alive is the awful passivity of the taxpayers who doubt it, yet continue to fund its long, persecutory march through the institutions.

Christians are the worst, incidentally.

They see naked Darwinism in all its hideous glory, watch fellow Christians harassed and fired (often by people who make no pretense to be anything other than anti-Christian, using “science” as a vehicle).

And then? They turn on the Glory Hallelujah! Show, featuring “our spirit-breathed hostess Fluffelle”? Or at best they go to a big meeting with Harry Hi-Power about it and thus dissipate any useful energy they could have otherwise exercised.

It’s escapism. True motivation comes from within! Every citizen who is aware and cares already has the power to change things, without listening to a single burble from Fluffelle or Harry Hi-Power. Harassing Darwin doubters at work should cost bureaucrats their jobs and lawmakers their seats because it offends basic principles of justice.

Spend no money. Just read responsible sources on a case like this and then pick up the phone. If you are an American, I think it is already your right, at least so far.

Congress shall make no law respecting an establishment of religion, or prohibiting the free exercise thereof; or abridging the freedom of speech, or of the press; or the right of the people peaceably to assemble, and to petition the Government for a redress of grievances.

On the other hand, the people who wrote those lines did not think that “our brain are shaped for evolutionary fitness, not for truth.” Make no mistake; as Darwin’s boys win by default, it becomes a different world.

Note: Forty-five years ago when I was young, Christians really did organize to fight segregation. And it was a highly effective, law-abiding movement – as long as traditional Christians were the bulk of the activist leaders. I should know because I was a local organizer at a high school in Toronto (a multicultural city even then) where institutional racism was as popular as a crushed glass Sundae. But later, Christians retreated to various entertainments, worried that some people would say bad things about them if they exercised their rights as good citizens, and society took some very different turns all round. This is one.

If you are even reading this, you like to think for yourself. Either speak up now or don’t expect any help when your turn comes.

12 Replies to “So what will you do when your turn comes?”