I think Russia is primed and ready to get a dose of ID. 15 years after the fall of the Soviet Union, what are the attitudes about naturalistic evolution today?

Russia: Creationism Finds Support Among Young
A poll conducted by the Yuri Levada Center last September showed that only 26 percent of those surveyed supported the theory of evolution, while 49 percent of respondents said they believed man was created by God.

ID is not the same as creationism, however, ID has prospered when the cultural backdrop has been decidedly anti-Darwinian as in the US. Dembski credits Morris for the climate in the US which made people friendly toward ID. Perhaps the same will happen in Russia….

To go on with my story, an interesting development happened 7 years ago around May 1999. An NCSE emissary by the name of Barbara Forrest was sent to try to stem the tide of creationists in Russia. A report of her mission and a distress call is here Help Counter Creationism in Russia

NCSE member Barbara Forrest, who recently attended a conference in St. Petersburg, reports that Russian scientists desperately need resources to stem the rising tide of creationism in their country.

Do you see the irony in all of this? The Darwinists in Russia are looking to the leaders of materialist intellectual totalitarianism in America for help.

Given the numbers above, it appears Barb’s mission failed miserably. 🙂
To leave a little inspiration for all of us, here is a picture of the fall of Lenin’s statue symbolizing the end of the Soviet Union: 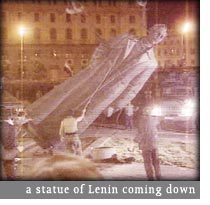 Oh, I can imagine some wonderful Darwinalia video games whose endpoint is the triumph of the ID heroes, and the taking down of a statue with a chorus of cheers, and the waving of flags of freedom by the ID Contras who prevailed over the Darwinistas.

9 Replies to “Is Russia ready for ID?”