While Stephen Colbert has called Michael J. Behe the “Father of Intelligent Design,” Behe’s arguments have been called, “close to heretical” by the New York Times Book Review, and Richard Dawkins has publicly taken him to task for his “maverick” views. Wherever he goes, Behe makes waves, but has remained singularly focused on doing rigorous scientific analysis that points to controversial but incredible results that other scientists won’t touch.

Twenty years after publishing his seminal work, Darwin’s Black Box, Behe shows that new scientific discoveries point to a stunning fact: Darwin’s mechanism works by a process of devolution, not evolution. On the surface, evolution can help make something look and act different, but it doesn’t have the ability to build or create anything at the genetic level. 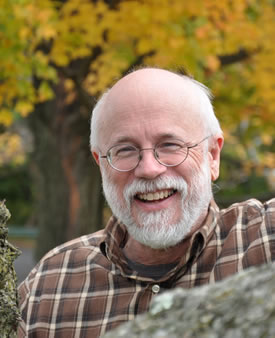 Critically analyzing the latest research, Behe gives a sweeping tour of how modern theories of evolution fall short and how the devolving nature of Darwin’s mechanism limits them even further. If we are to get a satisfactory answer to how the most complex, stunning life-forms arose, it’s time to acknowledge the conclusion that only an intelligent mind could have designed life.

We’re told that the basic thesis is, The First Rule of Adaptive Evolution: Break or blunt any functional gene whose loss would increase the number of offspring.

Lehigh University’s Mike Behe is, of course, also the author of Darwin’s Black Box (1996) and The Edge of Evolution: The Search for the Limits of Darwinism (2007)

Note: The book develops a paper Behe published in the Quarterly Review of Biology (2010),

Adaptive evolution can cause a species to gain, lose, or modify a function; therefore, it is of basic interest to determine whether any of these modes dominates the evolutionary process under particular circumstances. Because mutation occurs at the molecular level, it is necessary to examine the molecular changes produced by the underlying mutation in order to assess whether a given adaptation is best considered as a gain, loss, or modification of function. Although that was once impossible, the advance of molecular biology in the past half century has made it feasible. In this paper, I review molecular changes underlying some adaptations, with a particular emphasis on evolutionary experiments with microbes conducted over the past four decades. I show that by far the most common adaptive changes seen in those examples are due to the loss or modification of a pre-existing molecular function, and I discuss the possible reasons for the prominence of such mutations. – Michael J. Behe, “Experimental evolution, loss-of-function mutations, and “the first rule of adaptive evolution”,” The Quarterly Review of Biology 85, no. 4 (December 2010): 419-445. (paywall)