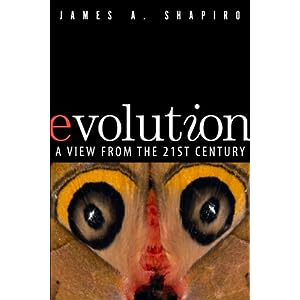 Look what University of Chicago’s James Shapiro is saying,

New research has shown that a novel way of looking at evolution is needed. Cells are sensitive and communicative information processing entities. Novelty in evolution comes in part from genome changes that are the result of regulated cellular activity. The next step in the understanding of evolution is emerging since the Modern Synthesis of Darwinism and Mendelism and the discovery of the double helix structure of DNA in the middle of the last century. Vid also. Slides here.

He says the new way is informatics. And it’s okay for an establishment guy to just say this stuff?:

1. Origin of life & the first cells – still on the fringes of serious scientific discussion

3. The actual processes of evolutionary change over time – an ever growing number of distinct documented cellular and molecular events different from conventional predictions

and (besides the part about non-Darwinian biologists)

Four kinds of rapid, multi-character changes Darwin could not have imagined• Horizontal DNA transfer in evolution;

His new book, Evolution in the 21st century here.

Follow UD News for breaking news on the design controversy.

38 Replies to “Is cell biologist James Shapiro a heretic? Or is this the year Darwinism collapsed?”