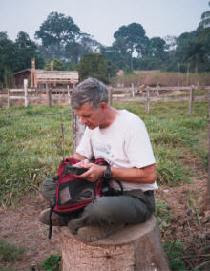 My friend Forrest Mims, survivor of Darwinist thug attacks, has recently been named one of the “50 best brains in science” by Discover Magazine (December 2008, page 43). The cover story informs us, “there may be no amateur scientists more prolific than Forrest Mims.” It is not on line yet.

The Discover article classes Mims as an Outsider and reads, in part, “There may be no amateur scientist more prolific than Forrest M. Mims III, 64, of south central Texas. He has published in major scientific journals such as Nature as well as countless general-interest publications. Mims began teaching himself science and electronics at age 11 and says he never received any formal training apart from a few introductory college courses in biology and chemistry.” I am told the list includes some other relative unknowns, as well as Bill Gates, Stephen Hawking (on the cover), Michael Griffin (head of NASA), James Hansen (global warming guru), E. O. Wilson (sociobiologist and evolutionist), Larry Page and Sergey Brin (Google founders), Neil deGrasse Tyson (PBS Nova), Harold Varmus (NIH), and J. Craig Ventner (human genome).

The selection panel has good reason for its view of Forrest. For a man with little formal science training, Mims has done an astonishing amount of research that has been published in a variety of journals. He has written many popular articles, as well as books. He is probably best known for the books and lab kits on electronics projects that he had developed for Radio Shack over the years. He even has a claim to minor historical fame as a co-founder of MITS, Inc., which introduced the Altair 8800, the first microcomputer, in 1975.

Encouraged by her family, his daughter Sarah Mims had a journal publication while still a high school student.

However, Forrest told me yesterday that when he was first told by a Discover editor to expect his name to come up, he worried that it was a vulgar hit piece, retailing the “Scientific American” affair or the “Eric Pianka” episode.

In 1989, Scientific American abruptly withdrew from a promising relationship with Forrest when he refused to subscribe to Darwin’s theory of evolution:

Mims had offered to write the column “Amateur Scientist” for SciAm.
His offer was gladly accepted in principle, pending an interview to discuss the details with editor Jonathan Piel. Mims canceled his current assignments and boarded a plane.

It should have been a great meeting. And it was, at first. Piel liked Mims’s proposed topics. The deal was pretty well sewn up—until Mims happened to mention, in a list of publications for which he had written, some Christian magazines, where he wrote about how to take kids on long distance bicycle trips.

Piel asked bluntly: “Do you believe in the Darwinian theory of evolution?”

Suddenly, the temperature plunged below freezing.

In the months that followed, SciAm editors pestered Mims about his religious beliefs, and even about his opinion on abortion. The magazine grudgingly assigned him a trial column. Editors liked it. More assignments were ordered. Maybe things would work out after all, Mims thought. Maybe he had finally passed all of the Darwinists’ tests.

However, during one phone call, Piel again raised the subject of Mims’s Christian beliefs. He professed worry that, if word got out that Mims was a Christian, a “public relations nightmare” might ensue.

By then Mims had realized the sad truth: SciAm was not simply going to assign him a column … (By Design or by Chance?, pp. 187-88)

He moved on, of course, and told me later (2003) that not getting the column was probably the best thing for his science career: “It changed me from a mere science writer to a citizen scientist with many peer-reviewed papers.” Here is his own account of the Scientific American affair.

Then there was the 2006 Eric Pianka episode, when a Texas Academy of Science spokesman told the videographer not to record the address given by award-winning environmental doomsayer Pianka. Spotting this, Mims took notes and was able to record some of the address via the audio on his camera. He could not record all of it, however, because the camera audio did not work when he was using the video to film the visuals Pianka provided.

The inflammatory statements he published, based on his notes and recording, were later disputed by the Academy, causing him much personal anguish. It was readily apparent that the Academy, embarrassed by Dr. Pianka’s “anti-human race” views, had steamed into in full denial mode. Its efforts to discredit Mims appear to have failed.

Here is a link to a partial transcript of the Pianka episode.

With her parents’ encouragement, Sarah started to study the atmosphere in Texas in 2001. She discovered that some of the airborne dust had blown all the way from the Sahara Desert in Africa. But in 2002, she discovered something even more remarkable: Dust from nearby regions was full of soot, and the soot carried bacteria and fungus. These life forms, she found, had escaped from faraway fires. In other words, contrary to what many think, fire did not kill them, it actually spread them. Sarah confirmed her findings in 2003, and they were published in Atmospheric Environment in 2004. If other studies confirm them, the use of burning as a method of clearing fields may need to be rethought.

… while doing research at the Mauna Loa Observatory (Hawaii) after the Scientific American debacle, Mims was confronted by a tourist who asked him, “Are you a scientist? A real scientist?” The tourist only wanted someone to show him how the instruments worked, but for Forrest, the question meant far more. He realized that the doors that shut us out are not wood and steel but ideas and philosophies, including our own. If he did science, he was a real scientist, and that was enough.

Incidentally, things have changed at Scientific American. The magazine has since published a column based on an instrument that Mims designed, as well as a news feature about his study of airborne bacteria in Brazil. Perhaps up-and-coming Christian scientists like Sarah will find the scientific world more open to different perspectives. (Today’s Christian, January/February 2005, Vol. 43, No. 1, 46)

Congratulations to Forrest Mims, a voice for real science in the midst of a mass of taxpayer-funded propaganda for unbelievable beliefs that happen to be held by scientists.

2 Replies to “Vindication for ID guy: Forrest Mims one of “50 best brains in science””