Back in June I made a post here at UD that included my foreword to Ken Poppe’s book RECLAIMING SCIENCE FROM DARWINISM (see here). In the post, I did not indicate the book to which it would be a foreword since the book was not yet out and I didn’t want to jeopardize its reception. As it is, the publisher sanitized the foreword. Below the fold is the original as I had intended it.

Let me urge you to get Poppe’s book. It is available at Amazon.com here. 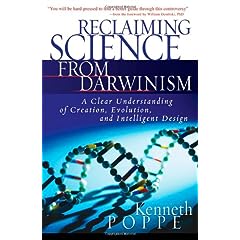 FOREWORD TO FORTHCOMING BOOK
By William A. Dembski

In the film Moonstruck, Loretta (played by Cher) has an affair with her future brother-in-law (played by Nicholas Cage). To get her life back on track, Loretta goes to confession. Here is the exchange with her priest:

Darwinism is like LorettaÃ¢â‚¬â„¢s confession. A number of its claims are innocuous, such as that organisms have changed over time, that organisms can adapt to changing environmental conditions, or that gene frequencies may vary in a population. But, as with LorettaÃ¢â‚¬â„¢s confession, tucked in among these innocuous claims is a whopper. The whopper, in the case of Darwinism, is this: all organisms, including ourselves, are the result of a blind, purposeless evolutionary process (namely, the Darwinian mechanism of natural selection and random variation) that at no place required the services of God or any guiding intelligence.

Like Loretta, Darwinists bury this whopper among evolutionÃ¢â‚¬â„¢s more innocuous claims, only this time they do it not to befuddle a priest but to beguile an unsuspecting public. For instance, when parents press school boards and biology teachers about what they are teaching their children concerning biological origins, they typically get the innocuous version of evolution: of course you believe that organisms have changed over time … surely youÃ¢â‚¬â„¢ve heard of bugs developing antibiotic resistance … this is evolution in action.

Indeed, this is evolution in action. But it is small-scale microevolution that no one disputes and that is irrelevant to the really big claim of evolutionary theory, namely, that the bug that developed antibiotic resistance and you, the poor human whose immune system cannot resist the bug, are both offspring of some common ancestor in the distant past and that the process that brought you and the bug into existence is Darwinian, operating by chance and necessity and without plan or purpose. In particular, you, your aspirations, and the entire human family to which you belong are simply an accident of natural history, here for a brief moment and destined for extinction. This is Darwinism in its full glory.

To see that this view of evolution is widely accepted among our educators, consider that in 1995 the National Association of Biology Teachers (NABT), which sets the tone and rhythm for biology instruction across the United States, issued the following statement on evolution: Ã¢â‚¬Å“The diversity of life on earth is the outcome of evolution: an unsupervised, impersonal, unpredictable and natural process of temporal descent with genetic modification that is affected by natural selection, chance, historical contingencies and changing environments.Ã¢â‚¬Â (Emphasis added.) Two years later the NABT removed the words Ã¢â‚¬Å“unsupervisedÃ¢â‚¬Â and Ã¢â‚¬Å“impersonalÃ¢â‚¬Â to placate religious believers. In this way, they attempted to maintain the facade that evolution is perfectly compatible with religious beliefs. But the removal was all for show. A subsequent bullet point states that Darwinian evolution, which is the form of evolution the NABT supports, Ã¢â‚¬Å“has no specific direction or goal, including survival of a species.Ã¢â‚¬Â Thus, for the NABT, evolution remains to this day a Darwinian process that operates without plan or purpose.

Suffocating as Darwinism is to the human spirit, we cannot reject it simply because we donÃ¢â‚¬â„¢t like it. If the truth hurts, deal with it. But is it true? Is it the case that we evolved through a blind Darwinian process? What evidence supports this grand view of evolution and what evidence disconfirms it? In this book, [snip] answers these questions brilliantly and decisively. In particular, he shows that Darwinism needs to be defeated not as an apologetic ploy to promote Christian theism but because it is demonstrably false. Indeed, he shows that the evidence of biology supports not the view of evolution endorsed by the NABT (and peddled in all the basal biology textbooks at their behest). Rather, the evidence of biology supports intelligent design.

At this point, valiant defenders of evolution, of which there are many, usually play the Ã¢â‚¬Å“overwhelming evidence card.Ã¢â‚¬Â Accordingly, they tell us that there are Ã¢â‚¬Å“mountains and mountains of evidence for evolutionÃ¢â‚¬Â (Darwinist Richard Dawkins used precisely those words in his recent attack on religion for the BBC series titled The Root of All Evil?). When I hear Darwinists use the phrase Ã¢â‚¬Å“overwhelming evidenceÃ¢â‚¬Â to tout their theory, I think of a story that my colleague Del Ratzsch at Calvin College tells about the wife of an entertainer who, according to a tabloid, descended from aliens. The key piece of evidence cited to support this hypothesis was that the woman had slightly lower than average blood pressure. Obviously, the problem with such an argument is that there is no rational connection between blood pressure and alien descent.

Likewise, there is no rational connection between the mountains of evidence cited by Darwinists and the grand claim they make that all organisms are descended from a last universal common ancestor via a purposeless material process (which they understand as the interplay of natural selection and random variation). Because no such rational connection exists, evolutionary theory, in its grand macroevolutionary Darwinian form, flies in the face of the scientific method and should not be taught except as a discredited speculative hypothesis that properly belongs to nature religions and mystery cults and not to science. Indeed, the grand claim of Darwinian evolution has never been tested: all the evidence and experiments cited to support it have no rational connection with it. At best, they support that there was a gradual progression of living forms. But they do not support that such a progression occurred without the need for intelligent input.

If these words sound heretical, it is only because Darwinists have brainwashed a gullible public for too long. Invariably, when intelligent design is brought up as an alternative to Darwinian evolution, Darwinists respond indignantly, casting themselves as protectors of science by affirming their brand of evolution and by shooting down intelligent design. Accordingly, we are supposed to think that they are the ones who are pro-science whereas the proponents of intelligent design are anti-science.

We need to see the DarwinistsÃ¢â‚¬â„¢ behavior as the psychological aberration that it is. Indeed, their behavior exhibits classic defense mechanisms, notably, projection and reaction formation. Darwinists are projecting their own insecurities about their theory (because of the overwhelming absence of evidence for it) onto intelligent design. Moreover, because they realize at some level that intelligent design is raising valid objections to their theory and providing a cogent design-theoretic alternative, they react against it, viciously attacking it because its implications are intolerable.

Yet, in fact, as this book makes clear, intelligent design is the real science here. Intelligent design studies patterns in nature that are best explained as the result of intelligence. As such, it merges the natural sciences (such as physics, chemistry, and geology) with the engineering sciences (such as information theory, communication theory, and computational intelligence). Intelligent design makes testable predictions about the forms of complexity we should find in biological systems and the inherent limitations we should observe in evolutionary processes not controlled by intelligence. As this book demonstrates, these predictions are now being consistently borne out.

[Snip] is not an armchair general. He has been an active participant in the fray about which he writes. He is competent in the relevant science and he is a card-carrying member of the educational establishment in which this controversy over evolution and intelligent design is being played out. You will be hard-pressed to find a better guide through this minefield. Once you are through it, you will realize why the following words of Malcolm Muggeridge are finally coming true: “I myself am convinced that the theory of evolution [read Ã¢â‚¬Å“DarwinismÃ¢â‚¬Â], especially to the extent to which it has been applied, will be one of the greatest jokes in the history books of the future. Posterity will marvel that so very flimsy and dubious an hypothesis could be accepted with the incredible credulity it has.”