Here is one pro-ID author I’m not endorsing without even reading his book: Lou Barreto who wrote the pro-ID book Who is this Alien?. 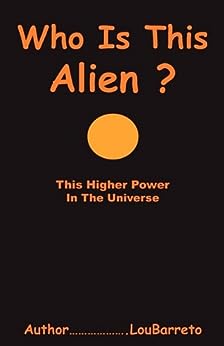 Recently, Nick Matzke has been getting criticism for dissing pro-ID books he’s not even read. See: Nick Matzke Book Burner. To his credit, Nick’s at least read some of the material by the ID authors he disses. But I think I might do Nick one better, I’m going to diss a pro-ID author and his book without reading his book. Why? See what Barreto wrote about me:

THE CRITICS OF INTELLIGENT DESIGN

Sal Cordova and other critics always seem to demand physical proof of the existence of God and yet many of these critics believe that there are alien life forms, extra-terrestrial beings, or a higher power somewhere in our universe. Do they require physical appearance of these aliens or a higher power? No. they just believe it without proof. The critics like Sal Cordova just believe the alien beings exist.

…
Sal Cordova is perhaps mentally sick, deranged, a bit to religious, must be on drugs, ….

Comment by Lou in Good and Bad reasons for rejecting ID

If this is really Lou Barreto posting this stuff at UD, I feel comfortable dissing his book without even reading it. If he can’t even get is promo material stating the facts right, why waste money on this book when you can use that money to buy Stephen Meyer’s book! If imitation is the highest form of flattery, then one can argue at least, through my actions, I put in a good word for Nick via example.

Doesn’t Lou realize who I am? I received many honors in relation to my advocacy of ID. For example, the highest honor came from one of America’s top bloggers in the ID/creation/evolution wars:

Without hesitation, I can tell you who the most contemptible, repulsive creationist I know is: he tops even Ray Comfort and Ken Ham in the pantheon of creationist liars for Jesus. It’s the otherwise negligible Sal Cordova,

Here is another slimy, dishonest creationist and liar for Jesus. Cordova’s style is well exemplified here.

He is neither the most influential nor the stupidest of the creationists, but he is probably the most vile and dishonest. He has absolutely no scruples concerning quote-mining, twisted misrepresentations and blatant, bald-faced lying to make a rhetorical point which might, at first, seem convincing to the ignorant.
…..
Diagnosis: Lunatic jerk. Liar for Jesus, crackpot and moron. Impact is probably negligible.

And I did have lesser honors like being on National TV in defense of ID:
Crocker, Sisson, Cordova, Chenette TV Special

I was mentioned in a book by Lauren Sandler and endorsed by Sam Harris in the chapter on Evolutionary Wars: the-new-face-evangelical-christianity-and-the-evolutionary-wars.

and featured in the cover story of the April 28, 2005 edition of the prestigious scientific journal Nature: Who has designs on your students minds.

[posted by scordova to assist the News desk with content and commentary until July 7, 2013]

3 Replies to “Dissing a pro-ID author without reading his book — will Sal do a Nick Matzke imitation?”