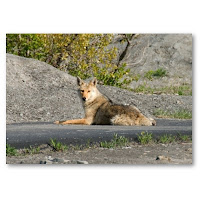 The one on the left is a coyote and the one on the right is a wolf. Hybrids can be anywhere in between.
Does anyone remember when “speciation” meant something? Here’s an item from the Toronto news: “Meet the coywolf: A newly emerging species is behind the brazen attacks in Durham”:

The predators that are plaguing Durham Region and showing up in urban areas appear to be an emerging species resulting from wolves and coyotes interbreeding.

The larger, highly adaptable animals “have the wolf characteristics of pack hunting and aggression and the coyote characteristics of lack of fear of human-developed areas,” says Trent University geneticist Bradley White, who’s been studying the hybrids for 12 years.

But that combination of genetic material from both species has spelled trouble for farmers, who are losing a growing number of livestock to predators. (August 15, 2009)

Star writer Carola Vyhnak, urban affairs reporter, was informed that this is an example of a new species forming, in other words, “evolution in action.” Not so in this case. This is a hybrid.

Wolves and coyotes have always had the ability to interbreed, producing a coywolf. They usually won’t if they have the choice of their own kind. But wolf elimination programs probably force the remaining wolves to hit on coyotes. Among canines generally, the rule seems to be “If yer not with the one ya love, ya love the one yer with! Yap! Yap! Yap!

Maybe sex ed would teach them to look for the right mates. But the program has been stalled because farmers are demanding that they be given abstinence education instead, pronto.

Incidentally, there are also coydogs and wolfdogs.

Note: These animals do not make good pets. They were born wild and they like it. People who want a pet should adopt a friendly shelter dog who really wants to live with people.

A link with great photos of wild canines around the world.

23 Replies to “Coffee! Evolution in action? Or do wolves and coyotes just desperately need sex ed?”