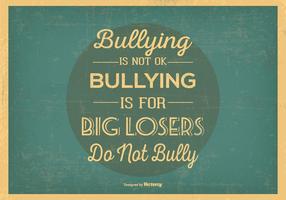 As if we didn’t know. But here’s a thought:

Over the past few weeks, the stories of three high-profile scientists accused of bullying have emerged: geneticist Nazneen Rahman, psychologist Tania Singer and astrophysicist Guinevere Kauffmann.

All the current accused are Top People (and all are women too, so put your red Handmaid dowdies back in the cupboard, girl… For once we are talking about something else.)

Neuroskeptic puts the climate that conduces to bullying down to idealism, the promotion of persons unsuited to administration into those positions, and prestige. About prestige:

In science, the senior figures have a lot of authority over their subordinates (especially at MPIs). But these senior figures also have enormous prestige – they are widely felt to deserve their authority, on account of their brilliant accomplishments. In other words, they have both ‘hard power’ and ‘soft power’. This makes them powerful indeed and makes blowing the whistle on them doubly daunting. Neuroskeptic, “Science’s Bullying Problem” at Discover

That’s going to be an especially devastating problem when the prestige is in fields that are at an impasse, like evolutionary biology and cosmology (and doubtless many others that we don’t cover much here).

See also: You think the SJW war on engineering is a joke… And that is your mistake. “Engineering education has been infiltrated by a ‘phalanx of social justice warriors’ who are steadily corrupting the field, according to a Michigan State University professor.”

Darwin fan: Yes, it IS “fetishization.” So? Berry may not realize the significance of his admission. When a science field is so dominated by members of a like faith, that faith is bound to be a source of myopia, as we are seeing today: Defense of Darwinism becomes a key purpose for many, to which finding out more about the history of life is secondary.

The fight over the universe has turned ugly, with accusations of “cheating” As a general rule, to determine where the cosmology bloom will drift, look for faint hopes of a multiverse. There, everything is possible so naturalism (nature is all there is, often called “materialism”) makes sense. Hossenfelder thinks the multiverse is  “a fringe idea” but Siegel is talking himself into believing in it. Probably not a coincidence

9 Replies to “Why so much bullying in science?”