Hitler and the Nazi Darwinian worldview 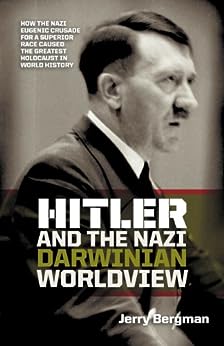 This book takes a fresh look at Germany’s most influential Nazi leaders, examining their backgrounds, education and convictions. It provides compelling evidence that the rising influence of Darwinism, eugenics and race theory in early-twentieth century society set the foundation for the Nazi pursuit of engineering a German “master race”-and exterminating European Jews, Gypsies, Blacks, most Slavs and the Christian religion in the ensuing madness of the Holocaust of World War II. The effect of social Darwinism, eugenics and anti-Semitism, and their relative acceptance in the scientific and medical communities of Germany and many other countries worldwide, opened the door to mass murder, medical experimentation and military conquest. This title examines the roots of Nazi ideology and unmasks the Darwinian “survival of the fittest” theory behind it.

A 5-star reviewer at amazon provided some exceprts:

1. Quoting from the book, “Hitler was confident that the world would some day thank him for eliminating this rotten parasitic race, even if Germany lost the war” (p. 32, see also 95).

3. “Expunging the Judeo-Christian-Muslim doctrine of human divine origins from mainline German theology and its schools, and replacing it with Darwinism, openly contributed to the acceptance of social Darwinism that culminated in the Holocaust” (76).

4. “What Hitler attempted to do must be ranked alongside the most heinous crimes of history, and Darwin as the father of one of the most destructive philosophies in history” (101).

5. “Himmler had no qualms about killing millions of people, especially those he deemed inferior races such as Jews, to achieve his Darwinian eugenic goal of producing a `superior’ race” (188).

6. Goebbles wrote in his diary (1939), “The Fuehrer is deeply religious, but deeply anti-Christian. He regards Christianity as a symptom of decay. Rightly so” (199).

7. “Hermann Goring was the second most powerful German Nazi, and one of the leaders in persecuting the churches” (217).

9. A Table on page 250 shows the nonsensical view that the “Black African” has a blood mixture that is “Predominantly ape” and the also absurd notion that the “Jewish (fiendish skull)” has blood mixture “Close to pure ape.”

I’ve not read the book, so commenters who have are especially welcome to comment. Those who haven’t read the book may comment what they know about the relationship of Darwin to the Nazis. I’ve heard conflicting viewpoints about this relationship, and I have no strong opinion.

It’s plausible to me that Hitler was conflicted about his religious beliefs. There seems to be evidence he practiced Catholicism sporadically but also eventually hated Christianity. There are probably comparable stories for other Nazis leaders.

22 Replies to “Hitler and the Nazi Darwinian worldview”