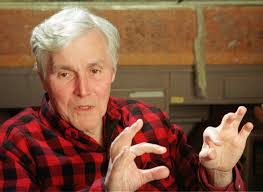 Carl Woese, world-renowned microbiologist and discoverer of the Archae (the third domain of life), has died at the age of 84, following a battle with Pancreatic cancer. The University of Illinois website reports,

Carl R. Woese, who overturned one of the major dogmas of biology with the discovery of Archaea, the third domain of life, passed away following complications from pancreatic cancer at the age of 84. Carl was a professor of Microbiology and a faculty member of the Institute for Genomic Biology.

No single individual has had a greater impact on the vitality of life at the IGB. Carl was truly a man of vision, creativity and passion, with a deep love of this university. He enjoyed deep respect from all who were fortunate to interact with him. He not only rewrote the textbook in evolutionary biology, but his discovery has given us the tools today to study the human microbiome, the incredibly diverse and complex assemblages of microorganisms in our bodies that contribute so much to both health and disease, in ways that we’re only beginning to understand. Carl Woese was one of the most significant biologists of the 20th century, and the University of Illinois has lost one of its greatest scientists.

Carl and his colleagues wrote two papers published in 1977 that overturned a universally held assumption about the basic structure of the tree of life. They reported that the microbes now known as Archaea were as distinct from bacteria as plants and animals are. Prior to this finding, scientists had grouped Archaea together with bacteria, and asserted that the tree of life had two main branches – the bacteria (which they called prokarya), and everything else (the eukarya). The new discovery added Archaea as a third main branch of the evolutionary family tree.

Carl was a long-time member of the Department of Microbiology and both a founding member and an inspirational figure at the IGB. As a stalwart of the Biocomplexity theme, Carl contributed in many ways to the rich intellectual life that we cherish so much at the IGB and was a key member of the Biocomplexity team that recently was awarded a major grant from NASA to study the origins of life.

Carl was widely recognized for his achievements. He has received the John D. and Catherine T. MacArthur Foundation “genius” award, the National Medal of Science, and in 1992 the Dutch Royal Academy of Science gave him the highest honor bestowed upon any microbiologist, the Leeuwenhoek Medal, awarded only once every 10 years. The Royal Swedish Academy of Sciences awarded Woese the Crafoord Prize in Biosciences in 2003 for his discovery of the third domain of life. He has been elected as a member of the National Academy of Sciences, a foreign member of The Royal Society, and held the Stanley O. Ikenberry Endowed Chair and served as Center for Advanced Study Professor of Microbiology at Illinois.

We send our condolences to Carl’s family and to the many students and colleagues who had the privilege of learning from him.