The theme of descent and dissent, which has been a theme on this blog and in my book UNCOMMON DISSENT: INTELLECTUALS WHO FIND DARWINISM UNCONVINCING, has been picked up by Steve Fuller in his new book DISSENT OVER DESCENT: EVOLUTION’S 500-YEAR WAR ON INTELLIGENT DESIGN. 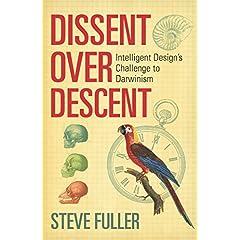 AMAZON.UK description: “If you think Intelligent Design Theory (IDT) is merely the respectable face of Christian fundamentalism, and Evolution the only sensible scientific world-view, think again…IDT has driven science for 500 years. It was responsible for the 17th century’s Scientific Revolution and helped build modern histories of physics, mathematics, genetics and social science. IDT’s proponents take literally the Biblical idea that humans have been created in God’s image. This confident, even arrogant, view of humanity enabled the West to triumph in the modern era. Evolution, on the other hand, derives from more ancient, even pagan, ideas about our rootedness in nature and the transience of all life forms. It has been always more popular outside the West, and until Darwin few evolutionists were scientists. What happened to reverse these two movements’ fortunes? Steve Fuller’s brilliant revisionist history is essential reading for anyone who wants a deeper understanding of science’s most vociferous debate.”