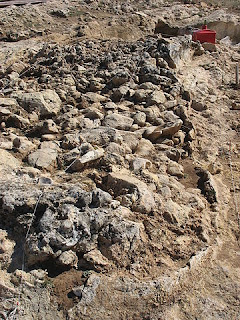 From Todd Wood at his blog:

News articles last week in El País and New Scientist report the discovery of a Neandertal infant burial in an ancient cave about 58 miles north of Madrid, Spain. …

The abstract describes the discovery of Des-Cubierta cave in 2009 and the subsequent excavation of Late Pleistocene remains of a Neandertal child.

From Richard Gray at New Scientist

The blackened hearths surround a spot where the jaw and six teeth of a Neanderthal toddler were found in the stony sediment. Puzzlingly, within each of these hearths was the horn or antler of a herbivore, apparently carefully placed there. In total, there were 30 horns from aurochs and bison as well as red deer antlers, and a rhino skull nearby.

Archaeologists believe the fires may have been lit as some sort of funeral ritual around where the toddler, known as the Lozoya Child, was placed around 38,000 to 42,000 years ago. More.

The authors of the study, Baquedano et al., suggest in their abstract that the site is probably some kind of grave with the small hearths and horns representing ritual funerary activity. If true, this would be the clearest evidence to date of symbolic behavior of Neandertals in caring for their dead. It looks like the Neandertal parents placed some hunting trophies in with their dead child and lit some small ritual fires. More.

The paper is not yet available.

Neanderthal Man: The long-lost relative turns up again, this time with documents