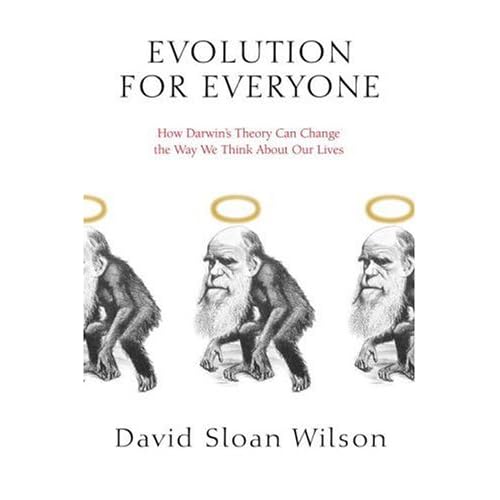 In a review of David Sloan Wilson’s book for popular audiences: Evolution for Everyone: How Darwin’s Theory Can Change the Way We Think About Our Lives, Mark Pagel, an evolutionary biologist, gives an unwitting slam of Darwinism. The review was published in the prestigious scientific journal Nature.

we discover that 54% of adults in the United States prefer to believe that humans did not evolve from some earlier species. What makes this figure surprising is that it is up from 46% in 1994.

The number of non-Darwinists is rising! Pagel then asks this rhetorical question, “Where have the evolutionists gone wrong?”

One answer is staring them in the face but not often noticed. A double irony is that it derives from their own theory: if people differ in the strength or conviction of their religious beliefs, if children tend to acquire religious beliefs from their parents, and if religious people, for whatever set of reasons, tend to have more children, then it follows from Darwin’s theory of evolution by natural selection that religious belief will spread: quod erat demonstrandum.

Indeed. Even if ID were not true, I pointed out why resistance is futile for the Darwinists attempting to stop the onslaught of ID. [See Dennett gives scientific reasons ID will prevail.]

But Pagel gives the other reason people in his profession fail to persuade creationists and ID proponents:

The other answer is the one that evolutionary biologists, including Sloan Wilson, prefer and it provides him with the impetus for this agreeable little book: that if the evidence for darwinian evolution is presented clearly enough and often enough, any reasonable person will come around to the darwinian view. What is there to say? The usual answer, that we share more than 98% of our genes with chimpanzees, is becoming hackneyed. It is the strangeness of human behaviour that really puts the darwinian view to the test. And here there is much to discuss. We have enormous brains that make us shrewd beyond belief in comparison to other animals, we have the only fully developed symbolic language on the planet, we cooperate with and engage in elaborate task-sharing and reciprocal relations with people we don’t know, we help the elderly, give money to charities, put on matching silly shirts to attend football matches, obediently wait in queues, die for our countries or even sometimes for an idea, and we positively ripple and snort with righteousness and indignation when we think others don’t do some of these things. We even have a word for this sense of how others ought to behave Ã¢â‚¬â€ morality. Chimpanzees, and for that matter other animals, aren’t like this. No wonder the creationists don’t believe the darwinian account.

Pagel is right on! He cites reasons beyond religion that creationists and ID proponents disbelieve the Darwinian account.

[Pagel, whether he realizes it or not, echoes the pro-ID arguments in the first chapter of an upcoming college level, pro-ID textbook.]

And it should be instructive to note, even 13% of atheists and agnostics disbelieve Darwin and accept special creation. So there are definitely creationists who reject Darwin for non-religious reasons. (Note: Some people, like long-time professor of physiology and evolutionary biology, John Davison, believe God created life, but that God is now dead. To each his own I suppose….)

Pagel closes by posing a utilitarian question as to whether belief in a higher power or belief in natural selection is more beneficial to society:

which set of beliefs, on balance, will be more useful, religious ones (whether true or not) or a belief in natural selection?

I’ll let the reader make up his or her own mind on that one. But I’m glad at least one evolutionary biologist is leaving the question open regarding the utility of Darwinism.

1. The 13% figure of non-theisitc creationists was reported by the National Center for Selling Evolution (NCSE), here. Specifically, the NCSE said:

Oddly, 13% of the agnostics/atheists who responded chose the “created in present form” option and 27% chose the “God guided process” option.

17 Replies to “Selling Evolution (an unwitting slam of Darwinism in the scientific journal, Nature)”