From Alva Noe at NPR, we learn: 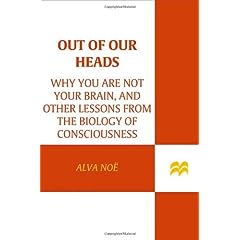 Nothing epitomizes this tendency better than Francis Crick’s famous claim — he called it his “astonishing hypothesis” — that you are your brain. At an interdisciplinary conference at Brown not so long ago, I heard a prominent neuroscientist blandly assert, as if voicing well-established scientific fact, that thoughts, feelings and beliefs are specific constellations of matter that are located (as it happens) inside the head. My own view — I laid this out in a book I wrote a few years back called Out of Our Heads — is that the brain is only part of the story, and that we can only begin to understand how the brain makes us consciousness by realizing that brain functions only in the setting of our bodies and our broader environmental (including our social and cultural) situation. The skull is not a magical membrane, my late collaborator, friend and teacher Susan Hurley used to say. And there is no reason to think the processes supporting consciousness are confined to what happens only on one side (the inside) of that boundary.

Taken seriously, these are fighting words.

But does Noe understand what he is saying? That there can be an immaterial mind that is not exclusively what neurons do? Guy better watch his back.

It’s tricky to come up with a rigorous scientific definition of consciousness which enjoys a broad consensus. On the other hand, we are all familiar with what consciousness is. Put simply, for a conscious organism, there is ‘something it is like’ to be that organism. Put another way, consciousness is lost when falling into a dreamless sleep (or undergoing general anaesthesia), and it is what returns the next morning on waking up (or coming round). More generally, consciousness implies a continuous (but interruptible) stream of phenomenal senses or experiences – a technicolour, multimodal, fully immersive and wholly personalised movie, playing to an audience of one.

It’s worth noting that this characterization of what it is for an organism to be conscious — that there is something that it is like to be that organism — was first advanced in the 70s by the philosopher Thomas Nagel.

I don’t intend this observation as a criticism. … More.

No, not a criticism, but a warning.

And Noe himself, who seems comfortable with naturalist premises except where they don’t make sense, had better beware the “punks, bullies, and hangers-on” that, in the words of computer science prof David Gelernter, formed a lynch mob out to get Nagel.

That’s because, in Mind & Cosmos, Nagel had doubted the all-sufficiency of the punks’ religion, Darwinism. He even admired Steve Meyers influential Darwin’s Doubt, on the Cambrian explosion.

Form experience, a word of advice to Noe and Seth: Don’t appease and don’t back down. It amounts to saying you don’t think your work is actually science. That’s all they want and need from you, and precisely what you can’t afford to give. And those who soldier on and don;t give in are, aswe all know, making progress.

See also: Neuroscience tried wholly embracing naturalism, but then the brain got away

The greatest strength of Out of Our Heads is the way in which Noë confronts the true significance of research findings that are often obscured for the public by materialist bias in the popular science media. For example, he notes, “It is disturbing to learn that so far there are no theoretically satisfying or practically reliable criteria for deciding when a person with brain injury is conscious or not.” It certainly is disturbing if you followed the Terry Schiavo case, or have watched the relentless advance of euthanasia legislation (though Noë avoids that issue).

He does discuss the implications of remarkable neuroscience studies like those of the late engineer and physiologist Paul Bach-y-Rita, who showed that blind people could be taught to “see” using their tactile sensations … More.

6 Replies to “Neuroscientist: Consciousness is not a neural phenomenon”