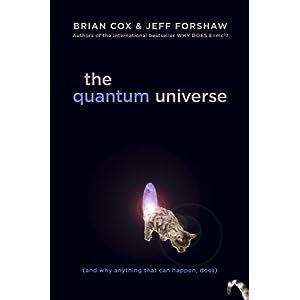 From “Big bang” (Nov 5th 2011), the Economist review of The Quantum Universe: Everything That Can Happen Does Happen. By Brian Cox and Jeff Forshaw:

Mr Hawking’s literary success was ascribed to his eschewing equations. One of his editors warned him that sales of the book would be halved by every equation he included; Mr Hawking inserted just one, E=mc2, and, even then, the volume acquired a sorry reputation for being bought but not read.

In other words, current cosmologies are marketed to the public as non-science while claiming the mantle of science. That accounts for much of what we see today.

By contrast, Mr Cox, whose previous book with Mr Forshaw investigated “Why does E=mc2?” (2009), has bravely sloshed a generous slug of mathematics throughout his texts.

Of course, anyone can write equations, …. but only in the same sense as anyone can produce accounting documents. Once you do, you provide a basis for evaluation that goes beyond “Wow. Way coooool.”

The difficulties in explaining physics without using maths are longstanding. Einstein mused, “The eternal mystery of the world is its comprehensibility,” and “the fact that it is comprehensible is a miracle.” Yet the language in which the world is described is that of maths, a relatively sound grasp of which is needed to comprehend the difficulties that physicists are trying to resolve as well as the possible solutions. Mr Cox has secured a large fan base with his boyish good looks, his happy turns of phrase and his knack for presenting complex ideas using simple analogies. He also admirably shies away from dumbing down. “The Quantum Universe” is not a dry undergraduate text book, but nor is it a particularly easy read.

For all we know, that may be the best that can be said for the authors’ thesis, but these days it is something.

So, they want the Higgs boson to disappear and the neutrinos to be faster than light? Interesting. That would explain the comparative equinanimity … compared, say, to what happens when any one of innumerable objections to Darwinism is raised.

and
But if God is a pure mathematician … ?