The same day I first watched “Expelled” in theaters, I also watched the movie “21”. The movie “21” is based on the true story of MIT students who made a fortune in Las Vegas casinos through the use of mathematics.

The real story behind the movie began with an associate of Claude Shannon by the name of Dr. Edward O. Thorp of MIT. In the Early 60’s, Thorp published a landmark mathematical treatise on how to beat casinos. His research was so successful that Las Vegas casinos shut down many of their card tables for an entire year until they could devise counter measures to impede Thorp’s mathematics.

Thorp is arguably the greatest gambler of all time. He extended his gambling science to the stock market and made a fortune. His net worth is in the fractional to low billions. He is credited with some independent discoveries which were the foundation to the Black-Scholes-Merton equation relating heat transfer thermodynamics to stock option pricing. The equation won the Nobel prize and was the subject of the documentary: The Trillion Dollar Bet.

Thorp would probably be even richer today if Rudy Gulliani had not falsely implicated him in the racketeering scandal involving Michael Milken. Thorp, by the way, keeps a dartboard with Gulliani’s picture on it… 🙂

The relevance of Thorp’s math to Darwinism is that Thorp was a pioneer of risk management (which he used to create the world’s first hedge fund). In managing a hedge fund or managing the wagers in casinos, one is confronted with the mathematically defined problem of Gambler’s Ruin. The science of risk management allows a risk manager or a skilled gambler to defend against the perils gamblers ruin. Unfortunately for Darwinism, natural selection has little defense against the perils of gambler’s ruin. 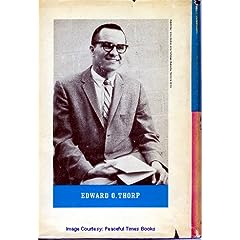 Even if an individual has a statistical advantage over a casino game, it is possible the individual can lose. Let’s say a skilled player has a 1% advantage on average over the casino. He wanders into the casino, looks for a favorable opportunity and wagers $500,000.00.

The movie “21” romanticized the advantage skilled players have. The movie “21” portrayed the MIT students as people who could sit at card tables and bilk casinos like ATM machines. That’s not how it works as testified by one of the more noteworthy members of the real MIT team by the name of Andy Bloch. Bloch reported that during his tenure as manager of the MIT team, the team was once in the red for 9 months before recovering. Skilled players lose big bets not quite 50% of the time. It is not unusual, on average, to have a losing streak of 8 hands in a row every 256 rounds. Ben Mezrich reported in his book, Bringing Down the House, an incident where the Big Player of the MIT team lost 3 hands in a row in 45 seconds of play for a sum total of $120,000.00! It happens…

A skilled player with a 1% advantage might expect to play 50,000 hands before his expected value exceeds the effect of one standard deviation of bad luck. That means he might have to play a looooong time before he realizes a profit….

What does this have to do with Darwinism? Darwin argued that

Natural selection acts only by taking advantage of slight successive variations; she can never take a great and sudden leap, but must advance by short and sure, though slow steps.”

But that is complete nonsense mathematically speaking because of the problem of gambler’s ruin. It is not surprising that Darwin could not see the flaw in his argument because he could not even do high school algebra even after substantial effort. The lack of basic math and logic pervades his flawed theory.

The problem is that a selectively-advantaged traits are still subject to random events. The most basic random event is with whether a parent will even pass down a gene to a child in the first place! Added to that problem is the nature of random events in general. A genetically advantaged individual may die by accident, get consumed by a predator, etc.

And the problem gets worse. Even if selectively advantage traits get spread to a small percentage of the population, it still has a strong chance of being wiped out by the sum total of random events. The mathematics of gambler’s ruin helped clarify the effect of random “selection” on natural selection.

Without going into details, I’ll quote the experts who investigated the issues. Consider the probability a selectively advantaged trait will survive in a population a mere 7 generations after it emerges:

This means is that natural selection is only slightly better than random chance. Darwin was absolutely wrong to suggest that the emergence of a novel trait will be preserved in most cases. It will not! Except for extreme selection pressures (like antibiotic resistance, pesticide resistance, anti-malaria drug resistance), selection fails to make much of an impact.

The contrast between a skilled gambler and natural selection is that a skilled player can wager small fractions of the money he sets aside for his trade. If a skilled gambler has $50,000, he might wager $100 at a time until the law of large numbers causes his statistical advantage to be asserted. He can attempt many many trials until his advantage eventually prevails. In this manner a skilled gambler can protect himself against the mathematics of gamblers ruin.

But natural selection is a blind watchmaker. It does not know how to perform risk management like a skilled player or the great math wizard, Edward Thorp. For natural selection to succeed in the way Thorp succeeded in the great casinos of Nevada and Wall Street, it has to hope the same mutant appears spontaneously many many times in many individuals. But for complex genes, this doesn’t happen. Truly novel and beneficial mutations are rare. They don’t repeat themselves very often, and when they arise, they will likely be wiped out unless there is fairly intense selection pressure (like we see in pesticide resistance or anti-biotic resistance or anti-malaria drug resistance, or malaria resistance associated with sickle cell anemia).

This illustrates that there has to be a limit to the number of innovations appearing in a population simultaneously for selection to work. The emergence of advantageous mutations in a population has the net effect of diluting the selective advantage of all the traits.

If trait A has a large selective advantage in relation to trait B, trait A dilutes the selective advantage of trait B. Thus trait B is exposed more and more to gambler’s ruin because of the existence of trait A. For example an individual with better eyesight (trait A) might prevail over an individual with higher intelligence (trait B). An otherwise good trait (intelligence) is lost because another trait (good eyesight) interferes with the ability of that trait (intelligence) to be maintained…

Thus one can see the problem of many “slight advantageous traits” being necessarily “slight” because of the problem of interference. But “slight” implies they are subject to gambler’s ruin, and thus unlikely to be preserved as Darwin asserted. Thus Darwin was dead wrong….

John Sanford gives a more rigorous treatment in his book Genetic Entropy where he gives more exact numbers on the limits of selective advantage based on problems such as interference. Sanford shows that a 1% selective advantage is fairly generous, and is usually less than 1%. [I emphasize the word “usually”].

Most ironic is that Fisher’s analysis of the effect of gambler’s ruin essentially trashes his own theorem, Fisher’s Fundamental Theorem of Natural Selection. Fisher’s Malthusian notions of “fitness” in his fundamental theorem do not account for the effect of random events taking out selectively advantaged traits. The fundamental theorem assumes evolution is noise free with respect to fitness, that advantageous traits always result in more offspring. We know empirically and theoretically this cannot possibly be true even on the approximate model of Mendelian inheritance.

Kimura gave an obligatory salute to Darwin by claiming adaptational features (like morphology) are exempt from his math. I’ve seen nothing supporting Kimura’s obligatory salute to Darwin. It seems his neutralist ideas apply quite well to realms beyond the molecular. NAS member Masotoshi Nei has finally been bold enough to assert most everything else about evolution, not just molecular evolution, is under much less selection pressure than previously assumed. I think Nei is right.

Yesterday afternoon I showed Kimura’s books to an ID-friendly senior in biology. His jaw dropped. He had studied molecular genetics, but our conversation yesterday helped him make the connections he had not made before. The math clearly indicates Darwin couldn’t possibly be right, and by way of extension, neither can Richard Dawkins.

These fairly obvious considerations were not lost upon Michael Lynch:

1. I created a Microsoft Excel Spreadsheet is provided for illustration of these concepts. I used a random number generator to simulate the progress of 10 equally skilled gamblers in a casino. Press the “F9” to redraw the graph. One can see that even “selectively” advantaged individuals can lose. The important thing to grasp is that “slight selective” advantages do not look very different from random walks except in the long run. The problem for natural selection in the wild is that there usually is no “long run” for a newly emerged trait if it suffers from gamblers ruin. The “long run” exists for skilled and intelligent risk managers like Edward Thorp, it does not exist, statistically speaking, for most selectively advantageous traits.

A copy of my spreadsheet can be accessed here.

2. Here is a nice pic of Bill with a standard casino die.

In the 1970’s, casinos had to redesign their craps tables in order to foil skilled dice throwers who exploited slightly non-random behaviors of dice. Las Vegas laws were passed that prevented skilled players from using there specially designed tosses which would exhibit non-random, statistically advantageous behavior.

Some people still claim to be able to influence dice so as to create non-random outcomes in a legal way. However, even skilled crap shooters need principles of risk management and precautions against gambler’s ruin to succeed.

Natural Selection is daily and hourly scrutinising, throughout the world, the slightest variations; rejecting those that are bad, preserving and adding up all that are good.

This is an even better quote showing how wrong Darwin was in light of these discussions.

3. Thanks to pantrog of PT for his editorial correction about sickle cell anemia. That was my editorial mistake not seeing it in the first place. My error was pointed out here here.

4. 5/8/08 One could easily modify the spreadsheet to stop progress when zero is hit, except if I did this, one would not easily see all the lines since most of them abort early thus giving a misleading impression of large scale progress. See this comment:
Comment about Spreadsheet

5. I wrote: If he has a 1% statistical advantage, that means he has a 50.5% chance of winning and a 49.5% chance of losing. To clarify, the outcomes are complicated by double-downs, splits, and blackjacks, etc. so the notion of “win” in this thread is effective average win over time per round….I didn’t want to get into these deep specifics earlier as it was peripheral to the thread…

6. 5/31/08 In response to various comments by those at UD and PandasThumb, I created another spreadsheet with some improvements. See the improvements at: ruin_olegt_mod1.xls. The princple changes were in response to suggestions by a very fine physicist by the name of Olegt who sometimes posts at TelicThoughts and PT. The new simulation has more rounds and actually prevents a player from playing once he is ruined.