The constant 1/137 may be variable after all.

This immutable number determines how stars burn, how chemistry happens and even whether atoms exist at all. Physicist Richard Feynman, who knew a thing or two about it, called it “one of the greatest damn mysteries of physics: a magic number that comes to us with no understanding”.

Now its mystery is deepening. Controversial hints suggest this number might not be the universal constant we had assumed, instead varying subtly over time and space. Michael Brooks, “There’s a glitch at the edge of the universe that could remake physics” at New Scientist

The importance of the constant is that it measures the strength of the electromagnetic interaction. It is precisely because the constant is so small (i.e. 1/137 as opposed to 1/3 or 5 or 100…) that quantum electrodynamics (QED) works so amazingly well as a quantum theory of electromagnetism. It means that when we go to calculate simple processes, such as two electrons scattering off one another through the exchange of photons, we only need to consider the simple case of one photon exchange — every additional photon you consider is less important by a factor of 1/137. This is why theorists have been so successful at making incredibly accurate predictions using QED. By contrast, the equivalent ‘fine-structure’ constant for he theory of strong interactions (quantum chromodynamics or QCD) is just about 1 at laboratory energy scales. This makes calculating things in QCD much, much more involved. “What is the importance of the number 137 in physics?” at PhysLink.com 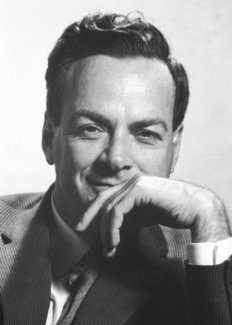 If you have ever read Cargo Cult Science by Richard Feynman, you know that he believed that there were still many things that experts, or in this case, physicists, did not know. One of these ‘unknowns’ that he pointed out often to all of his colleagues was the mysterious number 137. This number is the value of the fine-structure constant (the actual value is one over one-hundred and thirty seven), which is defined as the charge of the electron (q) squared over the product of Planck’s constant (h) times the speed of light (c). This number actually represents the probability that an electron will absorb a photon. However, this number has more significance in the fact that it relates three very important domains of physics: electromagnetism in the form of the charge of the electron, relativity in the form of the speed of light, and quantum mechanics in the form of Planck’s constant. Since the early 1900’s, physicists have thought that this number might be at the heart of a GUT, or Grand Unified Theory, which could relate the theories of electromagnetism, quantum mechanics, and most especially gravity. However, physicists have yet to find any link between the number 137 and any other physical law in the universe. “The mysterious 137” at Richard Feynman

Not to worry. If we believe all we read, fundamental physics is in a pickle anyway:

Discover: Even the best dark matter theories “are crumbling”

Is there a crisis in the physics of time?

The cat is back: Is quantum theory dead, alive, AND contradicting itself?

“Perhaps physics has slipped into a post-empirical era…”