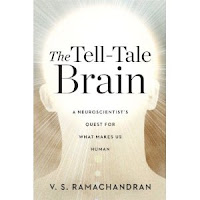 In “Mind in the Mirror,” Raymond Tallis reflects on V.S. Ramachandran’s The Tell-Tale Brain: A Neuroscientist’s Quest for What Makes Us Human, “Neuroscience can explain many brain functions, but not the mystery of consciousness”:

The subtitle of V.S. Ramachandran’s latest book prompts a question: Why should “A Neuroscientist’s Quest for What Makes Us Human” be of particular interest? The answer is obvious if you believe, as so many do, that humans are essentially their brains. When a brain scientist speaks, we should pay attention, for “What makes us human” then boils down to what makes our brains special, compared with those of other highly evolved creatures.


Dr. Ramachandran and many others, including prominent philosophers like Daniel Dennett and Patricia and Paul Churchland, promise that neuroscience will help us understand not only the mechanism of brain functions (such as those that coordinate movement or underpin speech) but also key features of human consciousness. As of yet, though, we have no neural explanation of even the most basic properties of consciousness, such as the unity of self, how it is rooted in an explicit past and explicit future, how experience is owned and referred to a self, and how we are, or feel that we are, voluntary agents. Neuroscience, in short, has no way of accommodating everyday first-person being.

No, and neuroscience is often invoked to explain things it doesn’t:

Here, as elsewhere, the intellectual audit trail connecting the neuroscience to the things he claims to explain is fragile. For a start, mirror neurons have been observed not just in monkeys and humans but also in swamp sparrows, enabling them to learn to sing the songs they hear. They are admirable birds, but their cultural achievements are modest. Moreover, the existence in humans of a distinct mirror neuron system with properties such as “mind-reading” is still contested. At any rate, the claim that mirror neurons are a “specialized circuitry for social cognition” in humans is a death-defying leap beyond the humble “Monkey see, Monkey do” function they were first observed to have.

Tallis describes himself, at his own site, as a humanist.

He is emeritus professor of geriatric medicine at the University of Manchester, and will publish Aping Mankind: Neuromania, Darwinitis and the Misrepresentation of Humanity, presumably a bash at evolutionary psychology and related pseudosciences.

It’s good to see actual humanists weighing in on these questions. Humanism had a respectable history before it was taken over by Darwin worshippers, at which point, the term might better have become “primatist.” What the new humanists were really interested in of human experience is what a chimpanzee could replicate. And once Apes R’ Us hit pop culture, it did considerable damage. After all, many people do not want to rise to the challenge of being human.

More stories from The Mindful Hack, my blog on neuroscience and spirituality issues: